This may seem a bit of a random post, however, after attending the Sheffield Hallam 3rd Art Student fundraiser event: “Kunst”, I was invited to take part in a very experiential and interesting project with one of the final year art students, Zoe Francis, whom has chosen to base her final project around hypnosis. I just had to share what an amazing opportunity I had and what the whole experience was like for me.

My first experience of being hypnotized was actually at the fund raiser, where the two hypnotists were offering an experience to guests, completely free as part of the event. Dr Karla Mistry (link to her Facebook HERE) was the first hypnotist to put me under hypnosis. She is also a professional hypnotherapist, as well as a stage hypnotist. The first thing Dr Karla asked me to do, was to concentrate on my hand, as I put my elbow on the table and allowed my wrist to relax. She was talking to my unconscious mind, now, addressing it like so: “I just want you to turn towards Heather and give her a little wave.” Well, without thinking, my hand just started to move clockwise, in quite a robotic movement to begin with. I just shook my head and started laughing- I found it hilarious that I wasn’t controlling my own hand right in front of my face and that I was fully conscious, watching it all happen! When my hand then gathered speed and actually waved at me, I thought I was going mad! But when I woke up from hypnosis, I was completely on top of the world, like I was told I’d be. There was a rush of adrenaline, like I’d just been on a roller coaster! It felt amazing!

Being under hypnosis definitely isn’t what you expect. For me, I was fully conscious, I was completely aware of what was going on around me and in control of my own thoughts. I also felt that, to an extent, I still had a lot of control. However, I chose to engage in the exercises, therefore I allowed my mind to be vulnerable to the hypnotist’s commands. The next day, Dean and I joined Zoe for her project experiment in the art studios at university. Today, I was put under hypnosis by comedy stage hypnotist Simon Sez (website link HERE), the other hypnotist  working with Zoe as part of her project. He asked how we felt about our first experience of being under hypnosis and how we felt about doing some more interesting things today. When we arrived, Zoe was already in a deep trance, as she was instructed to paint with her hand on the large sheets of paper that covered the walls. As this was experimental, Zoe was asked to paint in a number of ways, such as “male”, “sad”, “happy” etc. It was so interesting to see how Zoe responded immediately and just flowed from one image to the next as her behavior seemed to change completely each time.

As I watched Zoe and how she responded automatically to Simon when he said “go to sleep”. It was as if he’d pressed a button, she was so responsive! I was just sitting there wondering if I would be the same or if for some reason it might not work. I was soon going to find out… 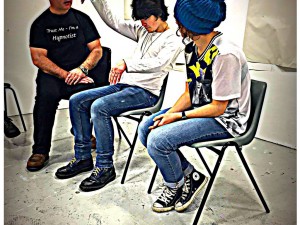 Simon put Dean and I under a trance at the same time. We were sat next to each other and he set it up so that when Dean went “to sleep” then so would I and vice versa. Watching Dean go deeper and deeper into a trance was interesting to watch, especially as his mind was so convinced there were helium balloons attached to his right hand that his arm levitated upwards, soon to be followed by the other. Then it was my turn…

I was asked to relax and so my body was completely limp. I knew how to relax with experience of meditation and mindfulness. I used mindfulness to concentrate on Simon’s voice, yet when I heard my phone beep in the background, I was worried this was going to affect my experience- however I soon became so relaxed that the phone and this worry faded into the background. I began to see a deep purple shape in front of me, like a distorted purple flower opening and closing and changing shades of purple as it moved. When I was told one of my arms was very heavier than the other, this was completely effective! I literally couldn’t move my arm at all, it was so heavy. This was the kind of thing that really worked well with me. As we had discussed, everyone responds differently under hypnosis and what works with some, not always works on others. 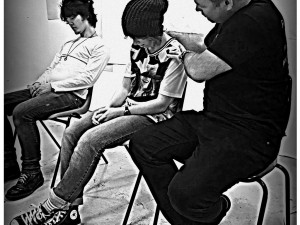 Like I mentioned earlier, I was fully aware of everything around me while in a trance. I could hear Simon putting another volunteer under hypnosis and could even open my eyes slightly and look around, yet my body was like it was in sleep paralysis. I did try to move my arms but my unconscious mind was so obedient to body control under hypnosis, my muscles contracted yet nothing happened what so ever. My head was a lead weight and this was usually the first thing that happened when I was triggered to “sleep” by one of the hypnotists. I felt my head slowly dropping and my eyelids became really heavy and sometimes they just stuck together completely. I found it funny when Dean was put under and then as I watched him, I was thinking ‘this is ridiculous- I’m not going to..’ and the next minute, I found my head gaining weight and eye lids sticking together. I giggled in the realization that I’d lost control of my movements once again. I suppose I would describe it more as a restriction that had been put on my movements rather than being completely under control, which is a typical initial thought from people when they think of being hypnotized.

Soon, the creative exercises began and we were invited to draw or paint something, while under a trance, on the paper walls of the studio. This is where things became very interesting. Simon informed me that my right hand was attracted to light and would respond to it like some kind of magnetic force. As I was drawing, I suddenly became aware of a little light at the top of my paper- without thinking, my hand moved towards it as soon as I caught sight of the torch light. I just laughed as I watched my hand, time and time again respond to the light automatically. Even when I was asked to resist it as much as I could, the best I could do was keep my arm still, but even then my fingers followed the light’s path. (Simon is not a Neanderthal – his arm is much nearer the camera !).

After having a laugh at this for a while, I was told that I’d hear angelic music as I saw the light and would feel and urge of excitement. Unfortunately, my unconscious didn’t seem to be able to respond so well to this and I couldn’t hear the music but my hand was still like a magnet to that light! I feel perhaps that my physical responses are very automatic, however the more complex imaginations like hearing music was perhaps a little too much, so I didn’t respond. Another thing I responded to was that when I was told I would find something funny, I really did get into uncontrollable laughter fits. I think I found it funny when my limbs did something I didn’t ask them to do or that I’d somehow lost control and was aware of it, I got the giggles anyway- but to be told something was funny just gave me more to laugh at!

Overall, I found my involvement with this little experiment very fun, creative and that being under hypnosis was quite a pleasant experience. I look forward to being involved with more of this project and as the activities were more based around painting/ drawing this time, I would be very intrigued to see how I would respond to my own art- writing under hypnosis! And how would that work? Could it be done? What would I write?

I would just like to thank Zoe Francis for inviting Dean and I to be part of her fascinating project and also a but thank you to the hypnotists, Dr Karla Mistry & Simon Sez for being professional and allowing us to feel comfortable during the process. This is definitely an experience worth trying out if you have never been hypnotized (as long as you feel safe!) and I will be very interested to see Zoe’s work unfold and more of what will become of this experiential project!

Have you ever been hypnotized? Would you be hypnotized? Please share your experiences in the comments